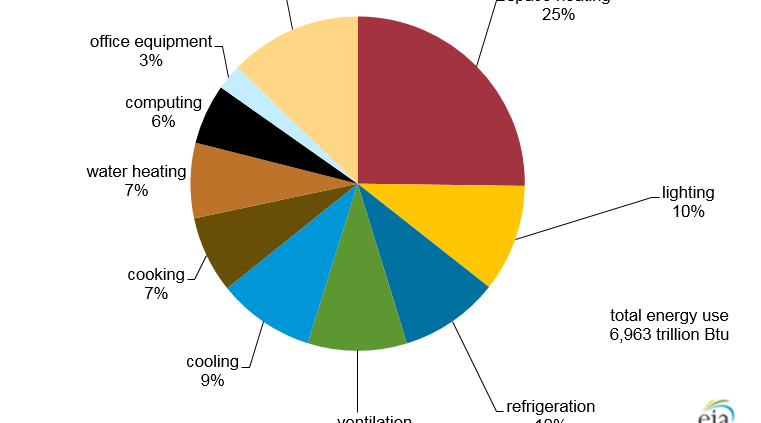 Thermal insulation helps shield a building’s interior so that it’s less affected by the exterior temperature, thereby substantially reducing the building’s energy usage, as well as energy costs. This can provide commercial building owners with the greatest return on an initial investment of almost any building material, especially if the building relies on heating and/or air-conditioning.

The U.S. Department of Energy (DOE) found in 2012 that 34% of the energy costs for the average commercial building are spent on space heating and cooling. Energy efficiency has increasingly become a concern of both builders and owners of commercial buildings. In order to maximize efficiency, each component of the roofing system is examined closely and then rated in terms of its level of thermal resistance. In fact, the DOE also found that there was a 26% decrease in energy usage for space heating and cooling between 2003 and 2012. This supports the improvements made in roof systems and insulation overall.

Energy costs for the average commercial building are spent on space heating and cooling was 34% in 2012.

Consider the following scenario: On a hot summer day, the meeting room in an office building has an air temperature of 72º F, yet the room’s occupants are feeling uncomfortably warm. Further investigation reveals that the wall and ceiling surface temperatures are nearly 90º F. This scenario illustrates that people sense heat loss and gain such that the radiative warming of their bodies is relative to the walls and ceiling, and not the air temperature.

Additional benefits of thermal insulation include:

In a conventional roof system, insulation is installed under the roof membrane. This is the most common low-slope roof application.

The location of the insulation in a conventional roof system poses a few disadvantages. When inspecting, look signs of the following:

Mechanical fasteners are exposed due to membrane shrinkage.

Ponding has formed due to insulation collapse.

In a protected membrane roof, also known as an inverted roof membrane assembly (IRMA), the insulation is installed on top of the membrane. The insulation may be exposed to water, so it should have minimal water absorption characteristics. Extruded polystyrene (XPS) is the most suitable type. The XPS boards are placed over the membrane and held down by a layer of ballast or lose pavers on top.

If a ballast is used, a filter fabric should be placed between the ballast insulation to prevent damage to the XPS. The other disadvantages of insulation discussed for the conventional roof system do not apply, since the roof membrane isn’t exposed. However, if the ballast or lose pavers on the exposed surface shift, the roofing system may be compromised; this is common after high winds.

No type of thermal insulation will be faultless in all of these areas. Also note that there are many types of thermal insulation, and each type has specific installation and compatibility requirements as determined by its manufacturer. The advantages and disadvantages of insulation discussed here are general and not all-inclusive. Read Types of Low-Slope Roof Insulation for more in-depth information related to specific types of insulation, or check with individual manufacturers.

The Takeaway for Commercial Property Inspectors

A large percentage of energy costs for the average commercial building is spent on heating and cooling. Thermal insulation helps reduce energy usage and energy costs while working to maintain the desired comfort level for building occupants. However, thermal insulation does have some disadvantages that are correlated to the location of the insulation.
The inspector should identify whether the roofing assembly is a conventional roof system or a protected membrane system (PMR). In a conventional roof system, the membrane is visible or has dime-sized aggregate embedded into the membrane. Although it is the most common type, it’s more prone to in-service defects than protected membrane systems. Some of the more obvious defects correspond to the location of the insulation under the membrane.

In a protected membrane system, the membrane can’t be seen because it’s covered in a layer of gravel or lose pavers. As the membrane is located under the insulation, it is less prone to mechanical and weather-related defects if it’s well-designed, installed, and maintained.

Want to join the discussion?
Feel free to contribute!

10 Easy Ways to Save Money & Energy in Your Home!

A Garage Inspection
Scroll to top